I did ride… and it was all Mike Lee’s fault. It was due to hanging out with him, Rocky MacDonald, and Aaron Roy in New York after Madison Square Garden’s 2010 Saturday night event. Mike asked if I had ever ridden a bull, and I told him I was from New York, and the closest I get to riding a bull is when I eat a steak. He invited me to come to Texas and said he would take me to the Lane Frost Memorial Ranch and teach me to ride. The timing never worked out, and then this year we moved to Nevada.

I have a friend, Jimmy Conway, who used to ride professionally “back in the day,” and knows a lot of the people involved, like Joe Baumgartner, Leah Garcia, Shorty Gorham, Cody Lambert, etc.; I’ve seen pix of him riding with Jim Sharpe in the background. Jimmy got me hooked up with a friend who has a bucking bull school, Pac-West Extreme Bull Riding School in California, not too far from here, and he helped make my dream come true!

If you watch RFD-TV’s PBR-NOW, J.W. Hart once had a caller who was 63 when he rode and wound up in the hospital. The look on J.W.’s face was priceless: What idiot would ride at 63??? I rode at 53 and couldn’t agree more. I am older than most of the fathers of the current bull riders, but wanted to ride after my conversation with Mike Lee that set the hook.

I asked Cody Campbell what he thought about me riding at my age. His very diplomatic quote to me was, “Well, sir, I don’t think it would be a very good idea.” He was right!!!! But, sometimes you do things you shouldn’t because you love them.

Cody knew there was no real polite way of saying “Hey there: old, tall, fat, out of shape, and very inexperienced dudes from NY should stay the hell off of bulls and leave that to professionals who are young enough and in shape enough and experienced enough to handle the extreme punishment most of the time!” So, he (like every bull rider I have ever met) was very polite and diplomatic and tried his best (unsuccessfully) to discourage me from the suicide mission. I was just letting those Mid-Westerners know that we New Yorkers are tough enough to wear blood, regardless of how foolish it was, and even if it was my blood!

But, the real lesson is that WE, the die hard fans of the PBR and bull riding in general, are THAT much involved that we will involve ourselves any way we can. I did !!!

And yup, my wife wanted me to die for riding at my age, height, weight, shape and inexperience… but I guess she figured the bull, Darth Vader, would do that for me.

It was an awesome experience and a huge adrenalin rush, and I am very happy I gave it a try. I was told I rode for about 3.5 seconds. As a matter of fact, I was told by Jimmy that he thought I rode like Bobby Delvecchio, another former New Yorker!

I hope it inspires others… as long as they realize the risks. I cannot recommend it highly enough. If I were young, healthy, thin, and had the opportunity, I would ride a lot more. I am soooo glad I rode (and survived) and would do it all again… but maybe not. One and done may be the best reality. And, there were no complaints of pain afterwards. As JB Mauney has said many times, “If you can’t take the pain, don’t play the game.”

I thank Mike Lee for his drive, determination, enthusiasm, encouragement, and hope to see him soon to talk to him about it and maybe make the trip to Lane’s Memorial Ranch and (maybe) try it again. I hope to see him in Sacramento at the end of January and talk further. And if I could work it out with Mike, I would ride again!

The really kewl part of this whole story is that the other person riding with me that day was the ranch owner’s son, Tyler Steuve, who is a great rider on the way to the pros. He has driven to Texas where he is going to compete in a number of events in the hopes of making it into the Touring Pro division and then hopefully to the PBR. He is a very kewl, honest, and very good rider… and to stay involved in the sport, soon I will become his first sponsor. I am really looking forward to helping him take the next step to find his way into the PBR! How’s them apples??? 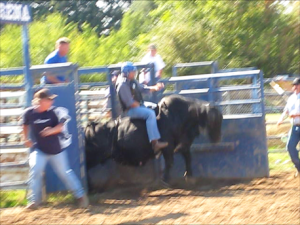 Buck 'im! Dr. Barks out of the chute on Darth Vader

Thanks for your involvement and love of the great sport of bull riding!!!! 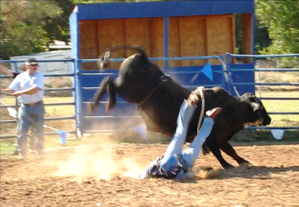 Didn't make 8, but that bull is looking good!