THE FIX IS IN: CHAMPIONSHIP SUNDAY, LIVE 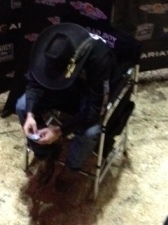 The PBR is officially in the business of fixing events. They might as well be the WWE and make JB Mauney wear a Superman cape.

No one can tell me this event’s outcome was legitimate. Fabiano Vieira won Rounds 1 and 2, and on Championship Sunday, he needed 86.75 to win over JB Mauney. The judges gave him 86.50. Another .25 ding to keep one of The Boys From Brazil from beating The Great White Hope. Instead, they declared a tie! When was the last time there was a tie at a PBR event? The interview with “the winner” was, of course, with JB. No Fabiano interview. 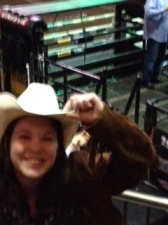 Does the PBR  think all viewers and ticket buyers share their blind devotion to JB Mauney and anti-Brazilian prejudice (or at least don’t notice it). Here’s a wakeup call: at least half of us see through the smoke and mirrors, and more people are catching on.

What happened on Sunday was despicable. Twisting the rules and the scores to keep the “JB’s on an unstoppable winning streak” storyline going is degrading the sport. When will this stop? Does the PBR plan to keep shafting Brazilian riders all season long, to make JB win every event through the next World Championship? Jay Daugherty needs to do something about this—or maybe he agrees with it. Or maybe he doesn’t have the power to stop the will of the investors. Speak up, Jay.

Since the PBR has discarded integrity, fair play, and sportsmanship, maybe people who want bull riding to remain a real sport should agitate for creation of an overseeing body. Any mainstream sport (the status to which they aspire) has an overseeing authority, e.g., the Commissioner of Baseball. In the interest of the sport, that body would investigate any allegations of wrongdoing, and if warranted, take legal action, revoke a license, issue disciplinary sanctions and fines, and maybe make some heads roll, too.

WANNA HEAR MORE UGLY?
Of the riders who were sent out after the event to sign autographs and get photos taken at the rails, as far as I could see, not one was a Brazilian. Lachlan Richardson was the only foreigner. (And now looks younger than Justin Bieber!)

THE CHUTE CLOCK
From the good seats on one side, you can see a clock (hidden from  general view) that times how long a rider is in the chute. It should be visible to everyone, so they can see how long certain riders are allowed, and how many are hassled after 10 seconds. Oh, what am I saying?? Then we’d have proof of “the JB clock” and the deliberate harassment of Brazilian riders, especially Silvano and Valdiron.

MISCELLANEOUS INFO
Kasey Hayes was a last-minute sub for Edevaldo Ferreira, and rode Cyber Cat for 86.50. Ty Pozzobon and Ben Jones weren’t able to ride in the Championship Round, but I missed both explanations.

HOW TO IMPROVE THE LIVE EXPERIENCE:

WEATHER REPORT
I figured out why Killer Bs were dropping like flies early in the day. It’s summer in Brazil—it’s too f***in’ cold for them in New York! Flint’s take on the messy weather described by meteorologists as “a mix of rain and snow”: “What is that? Decide!”

OH, PUH-LEEZE!
PBR’s latest misguided gambit to attract females (the kind who keep their boobs inside their clothes): special guest MARTHA STEWART, who handed out the prize to the Stanley Tools “Stud of the Night.” I couldn’t believe my eyes: ex-con Stewart in a cowboy hat, looking completely befuddled and Prozac-whacked, climbing into the stands to hand Stanley Stud stuff to some chubby hubby for making embarrassing moves. Once again, the PBR staggers the imagination with its oh-so-19th-century interpretations of women.

The real reason Martha attended: Dan Dienst, new CEO of Martha Stewart Living Omnimedia is “a long-time fan of the Professional Bull Riders.” He’s an ex-scrap metal executive, who fired 100 employees—including the magazine’s publisher—a week and a half before Christmas. Martha meanwhile was whooping it up in Miami. Nice people.

Scary fact (per her website): PBR is owned today by 44 cowboys and Spire Capital. She may be hallucinating the 44 cowboys; I wonder who told her that? The only information on the PBR website is that Spire Capital bought out the founders. Fake fact (also according to her website): “PBR reports that most shows across the country are sold out.” I must be hallucinating those empty seats I’ve seen at every event I’ve attended, and the ones I see on TV when the camera forgets to avoid panoramic shots.

I couldn’t help it: I had to look at Stewart’s photos of the event. You know how JB never comes out to the rail to sign autographs and get his picture taken, or goes with the other riders to “meet and greet” sessions? (I’ll take the $500 fine, please.) (For those who have seen him do these things, you’ll have to excuse me—at the New York and Connecticut events I’ve attended for several years, he hasn’t, and I think New York’s kind of an important gig, don’t you?) For Martha, he had to get on a bucking machine and show her how it’s done. (Kinda poetic justice, huh?) Then she talked with Shane Proctor about “the fashion of the PBR.” She really is clueless—didn’t she see Reese Cates’s orchid shirt and apricot chaps? Okay; it was a good plug for Shane’s leather business, but how many of her fans are gonna buy his chaps?

LIKIN’ IT—A LOT
Brendon Clark on the job as spokesperson for the BFT Good Works  (Ford.com/Goodworks) sweepstakes. He travels around visiting people who do good works for their community. The prize is $25K for the charity of your choice.

YOU GO, BOY!
Leah is thinking about timing Mike Lee’s arena victory laps. That math could get complicated; the arenas are all different sizes. But the PBR judges are really good at special math; I’m sure they can help her out.

8 Responses to THE FIX IS IN: CHAMPIONSHIP SUNDAY, LIVE