Before Finals, there was BlueDef Velocity Finals

Pre-show
When I arrived at the KFC Yum Center, I was excited to say the least. I walked in early with the VIP crowd. I had heard about a tour and I was hoping I would be accepted into the group with my Fan Club card. That’s what it’s for right? Well, I was wrong. The PBR had nothing for the Fan Club at this event. I talked to the woman inside multiple times. I bought the Fan Club card for that reason, so if there is a tour, I should be on it. Luckily, the tour numbers were light so they caved and let me through. I met many Fan Club members who weren’t so lucky the next night.

The tours were given by announcer Matt West and arena entertainer Matt Merritt. The tour started backstage. As we made our way through the halls, we passed Joao Ricardo Vieira and Rubens Barbosa. After a stop on the dirt, we all climbed up on the back of the chutes and to take photos of everyone, the bulls, and the chutes themselves. Matt West talked to us about everything from the bulls to the stage setups, and passed around a flank strap for us to feel.

Looking around I saw Robson Aragao getting prepped and Matt Triplett listening to music through his ear buds. While West showed us the back of Chad Berger’s truck, we were joined by Tyler Harr, Stormy Wing and Douglas Duncan. I went straight for Douglas Duncan. After snapping a photo, I told him it was my first time at a live show. He told me I was going to have a blast. He was right!

The tour ended with all of us ushered into a room where they passed out PBR program books with Kaique Pacheco, Nathan Schaper, and Matt Triplett on the cover.

Showtime
I sat approximately 4 rows up from the dirt near the chutes. The view was amazing! I enjoyed not only getting a great shot of the rides themselves, but also watching the riders up on the chutes. I could see them chatting to each other, stretching, and dancing (Spider-Man). Unfortunately, the KFC Yum Center told me I should not bring my camera. Although it’s not professional, it’s also not considered “small” and could prevent entry.  What frustrated me was that the KFC Yum Center didn’t bother checking bags. No one would have known if I brought my better camera. I was able to take a few pictures, but they are not close to the quality I am used to.

Something that struck me about watching PBR Live was the wrecks. The wrecks look more violent in person and I was even more amazed at how tough the cowboys are! An example of this: youngster Derek Kolbaba getting stepped on and run over by Cowtown Slinger.  It doesn’t look good on video, but in person, I was shocked he was able to get up so quickly.

Mike Lee was another rider who took a nasty hit. While the cameras were showing the replay, Mike Lee got up on the fence in front of my section and cheered with us. I love any time a rider shows appreciation to the fans and acknowledges them after a ride. Robson Palermo, good ride or bad ride, seems to always give the crowd a little wave and clap. He’s such a class act!

The biggest fan participation came anytime JB Mauney got up on a bull. The crowd exploded with cheers. Anytime I stood up, it was celebrating after a good ride, but I didn’t block anyone from seeing the ride itself—unlike some Mauney fans. I’m all for supporting your favorite riders, but we have to think of those around us. I hope everyone who wanted to see JB’s ride was able to! JB was bucked off quickly the first night, but redeemed himself on night two. He was the first bull rider I became a fan of, so it was great watching him ride.

My favorite rider is Kaique Pacheco, so I was thrilled to see him in person. He has beautiful presence on his bulls and is a lot of fun to watch! The first night was a close call, but alas, no score. Along with fans around me, I yelled “Challenge! Challenge!” However, it seems you can’t challenge on that tour. I’ve watched the Velocity Tour a few times, but I’m not familiar with the rule differences. The second night was a successful ride on Big John for 83.5 points. Unfortunately, that wasn’t enough to get him into the Championship Round, so Kaique’s weekend was over. He’s the number one rider on the Velocity tour. Couldn’t they have fitted him in somewhere?! Later on that night I saw Kaique sitting up on the chutes. While talking to another rider he made a pout expression and did a dramatic thumbs down. I can only imagine that was about the ride. 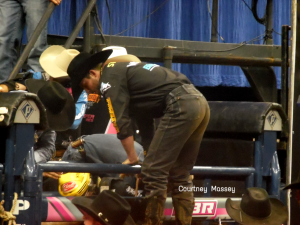 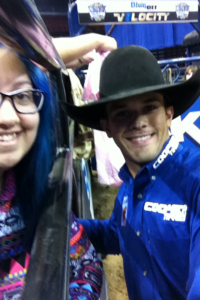 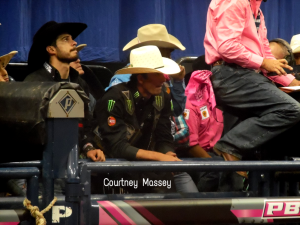 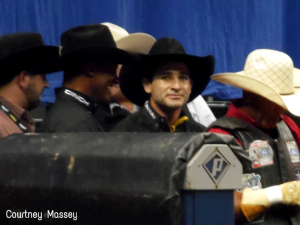 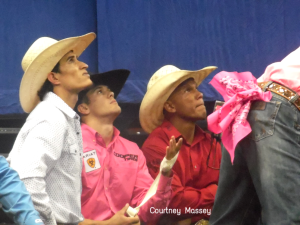 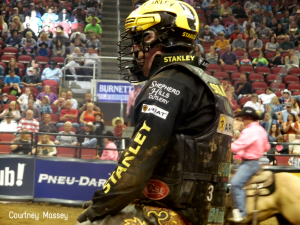 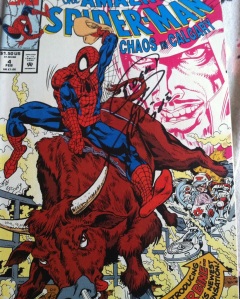 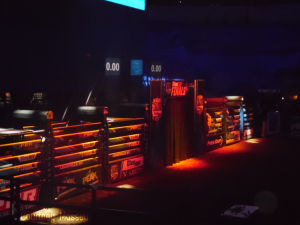 Each night I made my way down to the fence to meet with the riders. The riders seem to handle fan requests well, but a couple stood out from the crowd.

I loved the opportunity to see the riders, go backstage, and watch the bulls do their thing! I hope this is the start of many PBR events to come!

5 Responses to Before Finals, there was BlueDef Velocity Finals